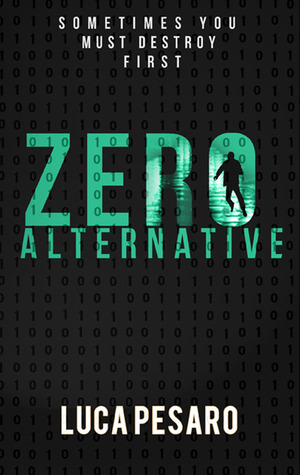 From the recession of 2008 was born a litter of woes.  Mortgage defaults.  Foreclosures.  Cram downs.  Lay-offs.  Furlough days.  Stagnant wages.

Was the recession caused by exotic financial instruments like mortgage-backed securities?  Was it the result of excessive pressure from the federal government on banks to issue home loans to borrowers who couldn’t pay the bills?  Or just the boom and bust of the business cycle?

That’s not the way that Scott “Yours” Walker (surely, an unintentional homonym with no relation to the governor of Wisconsin), the main character in Luca Pesaro’s financial techno-thriller Zero Alternative (2014), sees it.  Walker, an investment banker with a skeptical mind, inhabits a darker world, where friends and enemies alike work for larger, shadowy entities pulling strings behind the scenes.

The story begins with a banner performance by Walker, making millions in one day of trading when everybody in London but him predicted the worst.  It’s all downhill for Walker from there.  Walker’s friend D.M., who is just finishing the creation of a powerful predictive analytics software that can anticipate ups and downs in the market, is murdered.  The killer attempts to frame Walker, who has the next most knowledge of the software.

Walker goes on the lam with a hired gun on his tail.  Hired by a rival investment bank, perhaps.  The sexy woman at his side, Layla, was working for the hired gun, after she quit working for a foreign spy agency.  While on the run with her, Walker must trust her when she says she’s working for herself now.  They travel from London to France to Switzerland to Italy to the U.S., facing close shaves at every turn and doubting but seducing each other along the way.

The computer program is valuable enough to kill for.  While Walker isn’t above using the program to make money for himself or his allies while in hiding, he mainly wants to use the application to bring down an odious investment bank.  This is his act of rebellion against the too-big-to-fail financial system which is rigged to make money for itself regardless market direction or morality.  The adventure of Zero Alternative is in Walker’s personal, international life-and-death cage match against overwhelming forces of greed.  Whether Walker’s his pursuers will steal the computer program, whether he will be able to use the program against the financial system, and the question of Layla’s reliability, are compelling elements.

There is stock market terminology and information technology jargon in the book, but it is not excessive.  The movement of Walker and Layla across the borders of Europe into Italy are plausible for a man of Walker’s resources.  Where things get a little shaky are the oracle-like foresight of the computer program.  It might have been more plausible if the application occasionally predicted the wrong outcome, required input of more data in order to make a prediction, or if it had a lot of bugs to be worked out.  Also, the politics—the allegation that the recession is mainly the result of corporate greed—is not for all tastes.  But the excitement of the international chase and the tense romance make up for that.  Recommended.