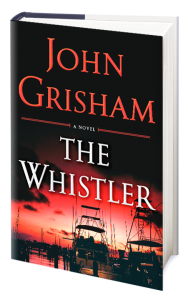 I enjoyed this legal thriller.  I figured that lawyers investigating a corrupt judge would be an interesting angle on the legal profession, and it was.

The judicial conduct investigators are Lacy and Hugo.  As they near the truth, their lives are in danger from a shadowy Gulf Coast syndicate.

I complain when books have too many characters.  The Whistler had many characters, but for some reason this was not a problem for me this time.  It may be because Grisham’s writing style is very lucid.  I never felt confused by who he was talking about.  The characters were crisply drawn, and the scenes and their motives were well defined, so the characters didn’t blur together.  One character in particular was very colorful—Lacy’s pugnacious real estate investor brother, Gunther.

That being said, there is probably one character that could have been cut.  Feeding information to Lacy and Hugo are three layers of snitches.  There is a mole, an intermediary, and an ex-con lawyer conveying information from the intermediary.  I was never quite sold on the need for three characters to be involved, when this could have been condensed fairly easily into two characters.

A number of Goodreads reviewers have suggested that the writing is good and the plot is fine, but that there’s a “missing spark” in this book, although they can’t put their finger on what it is.  I’d venture to say that it may have to do with a lack of conflict among the main, “good” characters.  Lacy and Hugo never bump heads.  Lacy and her boss Geismar have different approaches on how the investigation should proceed, but they never have a major difference.  Lacy’s love life is totally vanilla and progresses without fireworks toward the second half.  All the conflict is on the side of the villains/antagonists.  I think that the lack of a conflict or a personal transformation in Lacy’s life is probably how the air leaked out of this book’s balloon.

As usual, Grisham serves up various flavors of the South, with scenes in different cities throughout Florida, but also Mobile, Valdosta, and Mississippi.  Comments about race, real estate development, management of Indian casinos, and how organized crime in the South are all included.

Without spoiling anything, I would say that the ending was satisfying enough and brought closure to most of the plot elements.  However, there is a related case in the book about a wrongfully convicted inmate.  How things end up for him doesn’t really get spelled out.

The Whistler is nothing too deep, and everything comes together a bit too smoothly in the end, but it is still a pleasurable read with justice served. 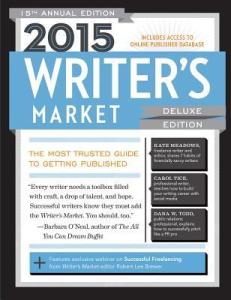 Writer’s Market is a great resource to writers.  Similar to other editions, the 2015 edition included articles on publishing your work and reference listings of book agents, publishers, and periodicals.

The section entitled “Query Letter Clinic” is a highlight.  I regard Writer’s Market as the gold standard reference for how to format queries and manuscripts if the agent or publisher hasn’t specified anything different.  Writer’s Market 2015 has very good query advice including clear examples of what to do and what not to do.  To me, this is the most useful part of the book.  There’s lots of “free” advice from other sources online about writing query letters, but you get what you pay for.

That being said, although many Writer’s Market buyers are probably aspiring novelists, the articles within the book are geared more so toward freelance magazine article writers.  That’s where a typical writer can actually make income.  Unfortunately, the articles become repetitive.  The contributors must not have known what other contributors were covering, or the editors didn’t really care that so many of the same topics were being covered three or four times, or both.

The writing style of the articles is very bold and almost “in your face.”  Some of the articles read more like blog posts by individuals who are very experienced and knowledgeable about the publishing world but who are also extremely opinionated and didactic.

The listing of publishers is must have been a perfect resource in the days before the internet.  The deluxe edition of Writer’s Market provides access to the information on the web (for which 2015 access has expired).  But a lot of information about publishers and agents is available online for free.

I found the section on contests to be eye-opening.  Pursuing awards is not something I have given a lot of thought, but contests can be a good way to get feedback and advance your craft.  Reading through the different contests and their submission guidelines gave me helpful ideas about what to do with some of my projects apart from the usual pitches and queries.

Every writer should get an edition of Writer’s Market at least once as a reference.  But these days, once may be enough, and in other years you can buy other books about publishing that are more specific to your genre.

LinkedIn for Military: A Warrior’s Guide for Changing Careers provides tips on using the business social network LinkedIn tailored for veterans as they transition from military to civilian employment.  It covers how to convey your career experience in LinkedIn, writing your profile summary, avoiding military acronyms, how to use your contacts to expand your LinkedIn following, and tips on joining LinkedIn groups.

The surprising thing about this book is how short it is.  At 32 pages with 14 point font with generous spacing, this is really an article in book format.  Not that a book on best practices for LinkedIn needs to be very long, but I was expecting something more substantive.

For example, “chapter” 2 is about crafting a powerful LinkedIn summary for your profile.  There are helpful suggestions on how to go about having an elevator pitch for yourself and using your career highlights in your LinkedIn profile.  But it would have been even more helpful if the book included additional examples of strong summaries and bad ones.  Instead, each chapter only includes one or two examples, and they’re almost always Air Force examples.

One area that the book does not get into is how to share updates or posts with your LinkedIn network.  Posting information to LinkedIn periodically about your field can help reinforce your expertise and drive engagement within your business network.

The best tip in the book is that you should get some people to read your LinkedIn profile and tell you what they think.  That’s always good advice, and I would add onto it by saying you should try to get somebody without military experience to read it to make sure your military jargon is readable, and try to get somebody outside of your family to read it for an objective critique.

I liked the concept of a short book advising veterans about proper use of LinkedIn, but this book left me very underwhelmed.

The premise of a thriller against the backdrop of the Iditarod sled race is an exciting one.  The novel (Sabotaged, 2015) starts strong.  Kirra’s cousin Meg is abducted.  Kira’s uncle Frank, a musher in the race, is coerced by criminals into doing a mysterious job for them before they will release Meg.  Frank is able to tell Kirra and her burgeoning love interest, Reef, what happened to Meg.  He wants them to rescue Meg without involving the police.

At first, Kirra and Reef appear to have a testy relationship.  The development of the romance between them is fairly predictable, and once it has developed, it unfortunately becomes a bit saccharine.  More conflicts or disagreements between the two as they investigate Meg’s abduction may have helped.  Though Kirra is nervous about Reef’s trustworthiness early on, he is generally depicted as strong, caring, tenacious, and faithful.  Kirra is scarred and impulsive, but he appears to have no faults, and I think because of that I became bored by their romance.

I was prepared to accept the exclusion of the police, but it did bother me after a while.  Kirra and Reef virtually become the police, seeking out leads and questioning them like characters are questioned in police procedurals.  The detective-style was an interesting but unexpected approach, and to me it almost became more technical than thrilling.

That being said, Dani Pettrey is a gifted writer who has a way with words.  The characters are grounded in Christian beliefs which is refreshing compared to other novels these days.  The Alaskan Courage series also has great covers, conjuring up a spirit of beautiful outdoor adventure.

I read this book partly because it’s on a Goodreads list called “Fiction: Police, Military & Service Dogs.”  It isn’t the fault of Pettrey that the book has been branded by readers this way, but unfortunately the listing (and cover and dust jacket involving the Iditarod) set up an unrealistic expectation for me.  I thought the Iditarod and the sled dogs would feature much more prominently in the plot.  Growing up in the South and being accustomed to labs and hounds, the idea of huskies and sled dogs always seemed very exotic and compelling to me.  I got my hopes up that I would learn something about the dogs of the Iditarod in this novel.  There was some information about the race itself, most of the action took place outside the Iditarod trail, and nothing about the dogs.

Oh well.  It was still an enjoyable romantic suspense novel if that type of book appeals to you.

In Gloria Whelan’s Listening for Lions (2005), Rachel is the daughter of a workaholic physician in Kenya.  The flu kills her parents and Valerie, a girl her age.  Valerie’s parents pretend to help Rachel, but actually intend her to pose as their daughter for selfish reasons to be learned later on in the book.

As an adult reader, your heart goes out to Rachel because you see how she blames herself for so many things that should be blamed on selfish grown-ups surrounding her.  Rachel fears that she will get in trouble for many things, like initially agreeing to Valerie’s parents’ plans, which, as an adult, you can see that she really won’t get in trouble for.  Despite Rachel’s intelligence and strength, she is too innocent or immature to foresee exactly what consequences will befall her if the truth of her identity does or does not come out.

Listening for Lions is written for young audiences.  It is marked by insightful, clear, but almost dreamlike prose.  At less than 200 double-spaced pages, it’s a quick read, but it’s not really the kind of book you’d want to rush through.  It encourages sitting back and weighing the words carefully, like you’re listening to a good old story from a grandmother or great aunt.

Just don’t expect much at all about lions.  Rachel loves Kenya, birds, books, and helping people.  She likes the roars of lions late at night, and she misses those sounds when she is in England.  But there is never a significant scene or deep connection involving a lion.  The lion’s roar is basically auditory wallpaper.  Compared to her lifelong interest in birds, making lions a title element is misleading.