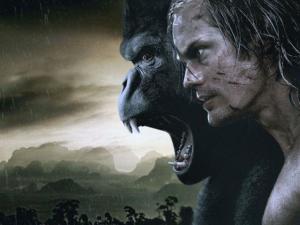 King Leopold dispatches Leon Rom to the Belgian Congo to exploit the colony by enslaving its locals and stealing the diamonds of Opar.  Chief Mbonga gives Rom the diamonds on the condition that he bring Tarzan back from England to the Congo.

Rom’s unseen hand is at work as Tarzan is misled twice to induce him back to Africa.  First by British business interests who want his presence in the Congo to calm the nerves of investors, then by Samuel L. Jackson’s character, Dr. George Washington Williams, an envoy from America interested in exposing the slave trade and militarization of the Congo.

At first Tarzan refuses.  He’s John Clayton III, Lord of Greystoke, a wealthy and sullenly dignified nobleman.  When a little girl asks him if it’s true that his mother is a gorilla, he pooh-poohs it, even though a gorilla nursed and raised him.  He doesn’t want to go home, but Dr. Williams talks him into it.

Fearing the effect her shirtless husband could have on female audiences, wife Jane insists on travelling with him.  Upon arrival, she is abducted by Rom, a prayer bead fondling creep.  He keeps plucky Jane in check by threatening to kill her native friends.

Abandoning every shred of doubt about going home, Greystoke immediately becomes Tarzan again, and is given a warmer welcome than Ali at the Rumble in the Jungle.  Greystoke reconnects with a friendly tribe, and warriors travel with him and Williams to head off Rom and Mbonga at the pass.  On the way is where most of the vine swinging takes place.  The good guys free slaves and hash out an old family feud within Tarzan’s gorilla family along the way.

The current day’s scenes are intercut with flashbacks to Tarzan’s youth and his first encounter with Jane.  Although the multiple flashbacks would be confusing in any other movie, they make sense here because we already understand Tarzan’s backstory.

Samuel L. Jackson provides comic relief along the way without profanity or silliness.  The story is adventurous but a tad on the serious side, so Jackson’s character is a welcome counterweight.  Alexander Skarsgard, who plays Tarzan, is the straight man making few jokes and smiling only a few times, mostly when among his tribesmen friends.  (That’s is why it’s perplexing that he was so reluctant to leave England.)

The big fight scenes—one during an escape effort by Jane, a two-round grudge match between Tarzan and his super-heavyweight gorilla brother Akut, and a battle against Mbonga, are all exciting.

But to me, the most exhilarating scenes are swinging into action from the treetops.  The Tarzan concept is a precursor mashup of Ewoks and Spiderman, with the freedom to swing around and serve justice under the jungle canopy instead of navigating New York’s skyscrapers.

It’s too bad that there aren’t more scenes in the jungle.  That’s where we normally think of Tarzan living.  In “The Legend of Tarzan” (2016) most of the scenes are someplace else:  England, the port, the village, the railroad, the river, Opar, etc.  On that score, “The Jungle Book” that came out earlier this year outperformed this movie.  (Plus it was fun to see little Mowgli use his wits to outsmart the bad guys, unlike Tarzan who relies more on physical traits.)  Nevertheless, “The Legend of Tarzan” is a thrilling movie to watch on the big screen.