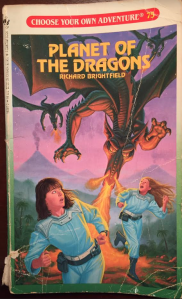 Although I read dozens of Choose Your Own Adventure books growing up, this is one of the few whose contents I remember.  The evocative title, Planet of the Dragons, appeals to me as much today as it did as a youngster.  While rummaging through a box of old books in the attic (literally), what choice did I have but to rescue this volume from storage and re-live the old adventure?

Your escape pod crash lands on Tambor, hundreds of light years from Earth.  You crawl out.  Smoke rises from the plains—a sign of battle.  Do you venture in that direction, or take to the hills?  The choices you make will determine the story unfolds for you.

Broadly speaking, there are three main potential storylines in this book, each involving a mysterious race of mechanical dragons which are not native to Tambor.  In one plotline, you meet a human girl named Millie who is worried but knowledgeable about the dragons.  If you choose differently, you never meet Millie, but you meet a strange race of Hyskos, humanoid creatures with bird faces who live on giant bubbles in the sky.  They are threatened by the dragons, and they would be thrilled to come up with a way to defeat them.  The third big story involves the Derns, a hobbit-like terrestrial race that is scared of the Hyskos and of the dragons, but has scientific knowledge that could be useful in the fight.

The various sub-stories involved with Millie are probably the most relatable and fun with some of the better endings in the book.  The interactions with the Hyskos can go well or badly, and they are a vivid species that I think captured my imagination as a young reader.  I don’t remember the Derns when I first read this book, and now I realize that may have been because the Derns bore me.  Their story takes up a lot of the book’s 117 pages.

The common thread is the threat of the dragons.  This creates a sense of wonder, suspense, and doom, and some neat artwork, but the fact that the dragons are mechanical devices is a letdown.  Also, there are a few storylines where you never encounter the dragons at all.  Additionally, you never really figure out the origins of the space dragons either, despite foreshadowing about “the Taurans, an evil race” on the first page of the book.

The natives of Tambor tell you that there is a race of indigenous dragons who are different from the evil machines.  But the native dragons were driven into hiding when the space dragons attacked.  As near as I could tell, there is only one single sub-storyline that leads you to meet the native dragons, and they are only described for barely one page.  I felt that was a missed opportunity.  I would have loved to see some storylines where you end up joining forces with the local, genuine dragons against the invading robot dragons!

Anyway, I loved the overall concept, obviously enough to read it and enjoy it at two distinct times in my life.  The options you get to choose from are reasonable, and the endings are fair, as in, “Okay, my choices didn’t end well for me, but that was still fun,” or “Yes, I made the right choice!”  I feel this book is a very good example of the series.  But I would have chosen more flesh-and-blood fire breathing dragons!