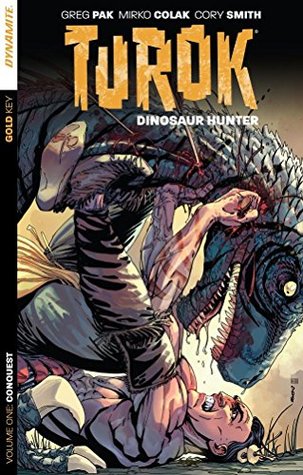 Impressive artwork. His fellow native Americans tease him, but Turok is naturally a stronger, cleverer, nobler warrior than them. Fresh from battles in the Holy Land, the English invade the New World bringing dinosaurs with them. (Yeah, a lot of timeline problems there and a touch of Dan Brown-style conspiracy theories, but try not to overthink it). Turok has to outwit the invaders and come up with a way to use the dinosaurs to his advantage. Volume 1 includes the first four issues and Greg Pak’s script for the first issue, plus bonus artwork. Those bonus features offer an interesting glimpse into the making of this reimagined 2014 version of the classic Turok series.