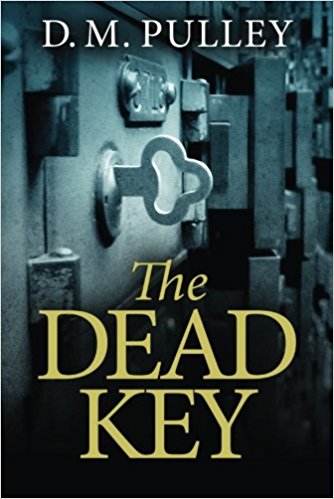 An absorbing novel by D.M. Pulley. The book alternates between two time periods in Cleveland—one in the late 1970s and the other in the late 1990s.

In the 1970s, sixteen-year-old Beatrice leaves home and starts a new life as a secretary at the First Bank of Cleveland. Although Beatrice doesn’t know it, the reader quickly learns that the bank was shut down not long after she starts working there.

In the 1990s, Iris, who is a new employee at an architectural firm, is sent to the First Bank of Cleveland’s old building to survey it. She has to take very careful measurements, notes, and drawings of all the floors of the high-rise building. We learn that the bank closure was very sudden. Consequently, many desks and files were left intact and untouched. The only apparent continuity is Ramone, a live-in security guard employed by the property owner.

At the heart of the book is a mystery surrounding the safe deposit boxes in the basement of the building. During her onsite inspections, Iris discovers a key to a safe deposit box maintained by her aunt that serves as the initial clue into the mystery.

The highlight of the book is the atmosphere. We are one with Iris in feeling palpable mystery from the big broody building. During the scenes with Beatrice, we are equally bewildered about what’s going on behind the scenes at the bank in the boardrooms and executive washrooms. Both young women are outsiders, not taken seriously by older, higher-ranking employees. Like them, the reader is shut out from understanding the truth. But through painstaking efforts of the heroines (on the part of Beatrice, some deceit and improvisation, and for Iris, intelligence and persistence) we gradually learn the story of corruption and theft at the bank.

Neither young woman is perfect. They are both flawed—almost dangerously so—which makes them more vulnerable in a high-stakes world where the powerful will stop at nothing to keep their secrets hidden. Their vulnerabilities increase the realism, intensity and suspense of the novel.

There are some cluttered elements in the book that could have been improved upon. For instance, there are a lot of middle and upper management male executives at the bank. It’s hard to distinguish and remember each of them. That makes the resolution of the mystery more difficult to follow.

Also, despite the title with a singular pronoun, The Dead Key, be prepared for many keys. So many keys that, like the businessmen at the bank, they become difficult to distinguish. Keys get left in desks, hiding places, bags, and keyholes. This key leads to that key leads to another key. And the keys are hidden or forgotten in the two distinct historical periods. So your brain better be firing on all cylinders when key placements are mentioned. I’m not saying this to help you solve the mystery, I’m saying it so you can follow subsequent scenes.

Like some contemporary fiction coming from India, this thriller presents us with savvy young women in danger in a financial den of wolves. In the Indian novels, there is typically an avuncular figure mentoring or looking out for the young woman. There is a little of that in The Dead Key, but it is mostly every woman for herself without much help from the boys. This could be seen as a feminist novel or women’s fiction, but categorizing it that way would be unfairly limiting. Even as a male reader I could certainly appreciate the position that Iris found herself in.

Final comment: this would make for a suspenseful Hitchcock-style movie.