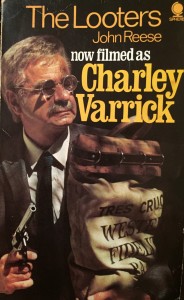 What an underappreciated storyteller was John Reese.  In some ways an heir to James Cain and Dashiell Hammet, Reese was able to create visceral plots infused with palpable greed, criminality, and menace in sunbaked California landscapes.

The Looters (1968) was billed on some book covers as “The exciting and violent story of a bank robbery.”  Indeed, the book includes such a story, but that doesn’t do it justice and the story doesn’t end there.  The Tres Cruces National Bank isn’t exactly as clean and pure as the wind-driven snow.  Investigators initially suspect that the robbery was an inside job orchestrated by somebody within the shadowy, mostly Italian owned parent entity that controls the bank.

Everybody loves money, but few people like numbers or financial complexity.  Even fewer can tolerate reading about the subject.  Reese is one of those rare authors who is able to convey a complicated financial caper to thrill his readers rather than crossing their eyes.  He did it with Two Thieves and a Puma and again with this book.  His quirky characters and their motivations are what carry the readers through the turning points in his plots.  Reese also usually takes time to explain what the financial interests of the different players are so readers don’t get lost.

In The Looters, Reese also shows that he is the master of creating characters who are complete jerks.  Take J. J. Schirmer, a bank executive who is not only prejudiced against Italians (constantly referring to his business partners as greasy Sicilian bastards or “Sicilian perverts”), he’s vile to work for.  In one of several scenes like it, Schirmer needlessly berates his driver, Eddie, at 8 a.m.:

Schirmer put down the phone and shouted for Eddie.  The chauffeur had slept in the lounge outside, and was still not dressed. ‘I been waiting to hear you was awake, Mist’ Schirmer,’ he said.

‘All right, you heard. Go get me a pot of coffee.’

‘I cain’t go like this, seh. I phone for it and have it here before—’

‘God damn it, I could have phoned for it. I want to use the phone!’

‘Never mind! I’m going to take a shower. Call for some coffee and then put in a call for Sybil at her place.’

The Looters is filled with deliciously nasty dialogue like that, and characters like Schirmer who show their cruelty, caprice, and superiority complexes at every turn.  Molly, a hired gun working for the Italians, is a world-class sadist and creep tasked with hunting down the bank robber before law enforcement gets him.  They are all harsh to take, but fun to read about.

The downside to the host of characters is that there isn’t a single antagonist or a single hero.  There are good qualities and bad qualities on all three sides of the character triangle:  the bank robbers, the bank owners, and law enforcement.  The lack of a single main character gives the book a different style and impact than the movie, which focused on Varrick (and made him more genial than the hard and ruthless robber in the book).

Reviews of this book have noted that the ending is different from the movie.  That is true, and in several ways, the film’s ending is superior to the book.  The memorable biplane chase from the movie is nowhere to be found in the book.  Whoever came up with that idea for the movie deserves credit for the exciting addition, which was quite sensible considering that Charley Varrick and his partner were crop dusters in the book.

The book’s ending was jarring.  The scene where Molly finds Charley occurs too suddenly, with very little build-up.  It would have been improved if Molly had to chase a few more leads prior to finding Charley, and if their physical confrontation had been more drawn out.  Because of that and the murkiness about the main character, I bump this book down from five stars to four.

That being said, this is still a sweat-inducing pistol of book ideal for a late-summer read.