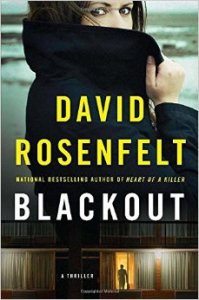 This book really snuck up on me.  At first, I was put off by the prospect of a hero suffering from amnesia.  It sounded hokey and soapy.  I read this as part of a group read, and wouldn’t have selected it on my own, so I wasn’t expecting much.  But about halfway through, Blackout (published in 2016) really started growing on me.  The amnesia thing stopped being a contrivance, and set the stage for a clever and unique investigation.

New Jersey state police officer Doug Brock is investigating a white collar crime boss with potential ties to domestic Muslim terrorists.  Just as he’s about to crack the case, he’s shot and loses his memory from the past 10 years.  He has to retrace his steps with help from another police officer, Jessie, who is an ex-girlfriend doing computer forensics work for the department.  Using his GPS data, she is able to provide him with a list of locations he visited during his investigation.  The tricky thing is that he’s never sure why he went to most of the places, or who he talked to, or what they talked about.  They didn’t even want to talk to him the first time.  You can imagine how happy they are to see him a second time, being confronted by questions like, “What did I ask you about the last time I was here?”

“Is this a joke?” is a typical response he gets.  He handles it better as he runs into more situations like that.  “Hey, my partner wants to hear what we talked about last time from your own mouth.  Humor us.”  These scenes were very amusing.

Doug is rash and impulsive, repeating some of the same dangerous mistakes the second time around that he made during the initial investigation.  But this time he has Jessie working with him, and Nate, his old partner.

Time is of the essence in the case.  Doug can’t afford to wait on his memory coming back, which his doctors tell him may or may not come back at all.  Finding out how many risks he took to crack the case the first time, Doug realizes it must be important enough to take risks to solve again.

The relationship between Doug and Jessie is intentionally awkward since they started dating and broke up during the timespan of Doug’s missing memories.  The way they start getting back together didn’t quite work for me.  It seemed like Jessie was adamant about not getting back together, and then one night she seems to cave.  It was a little sudden and weird.

For me, the police investigation was the more interesting component.  Despite the GPS data, this is basically an old-fashioned, somewhat dark detective novel, which is a compliment.  Blackout is a short book with a built-in clock ticking toward the resolution.  I don’t usually stay up late to read anything, but as I came toward the end of this book I made an exception.