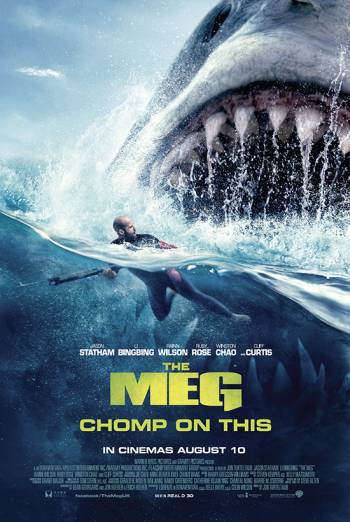 A very entertaining summertime popcorn muncher. This movie is way better than the previews would lead you to believe. The trailers are dominated by grainy underwater footage, lame one-liners, and flashes of over-the-top action without context.

But the actual movie is well-done with impressive visuals, humor that works, and shark scenes that make much more sense when seen in the context of the full story.

You have to wait for it, but the megalodon makes a great entrance. This is followed by an exciting deep-sea rescue. Then we get a little levity and brewing romance back at the oceanographic research station between Jonas (Jason Statham) and love interest Suyin (Li Bingbing). Soon we get big set-piece attempts to stop the giant shark (or sharks?) in the open sea and then again as it nears a crowded Chinese beach in a surprisingly fresh spin on the typical shark-in-the-shallows sequence.

The plot develops very quickly. In some other shark movies there is down time, lounging around on boats, chumming the water, waiting for something to happen until something terrible finally does. Not so much in this one—it’s pretty much one attack scene after another peppered with enjoyable conflict among the characters.

Readers of Steve Alten’s book, the one that started the megalodon craze of the past twenty years, will enjoy seeing the story finally making it to the silver screen. There have been a lot of imitators, but don’t be fooled—this is the definitive take on the original.

Jonas is a deep-sea pilot who survives a meg attack but many people doubt him. Years later, he’s proven right when a meg escapes the deep recesses of the Mariana Trench. Mayhem ensues.

While keeping that same basic premise, the movie takes liberties with the original story from there. The Japanese Terry Tanaka and her researcher father in the book are replaced in the movie by Chinese Suyin and her father, with Chinese settings taking the place of the American west coast to appeal to Chinese movie audiences.

There are other character changes too: the additions of a wisecracking billionaire Jack Morris (who provides an clever mix of comic relief and villainy), a badass geek babe “Jaxx” (as a vehicle for Australian actress Ruby Rose), and a precious daughter for Suyin for family appeal. Jonas’s ex-wife character is totally reworked.

“Meg-heads” should not be disappointed in the changes because the book’s spirit is alive and well in this juggernaut movie.

Don’t wait for Netflix—splurge now to see this on the big screen.

Even if you’re not going to the beach, you should read Steve Alten’s first book about a giant shark this summer.  The fifth book of Alten’s series came out just last week, so it’s time to start catching up.

Though MEG is similar to Jaws (giant shark goes on rampage) it is distinct and stands on its own.  The novel is about Carcharodon megalodon, not the great white shark of Jaws fame.  The premise is that extinct megalodons still exist.  They live so deep in the Mariana Trench that nobody knows.  They survive on the warmth of the thermal flows from the earth.  The water above them is too cold for them to swim in, so they are confined to the basement of the sea until an accident happens that unleashes one of them to the surface.  Mayhem ensues.

While the premise may sound far-fetched, each step toward the megalodon’s surfacing is presented in a believable fashion.  Even if somebody pooh-poohs the scientific plausibility of the anatomy and behavior of the meg, the idea of prehistoric mega-sharks among us is an imaginative and exhilarating concept.  The meg is so big that it poses a threat to ships and whale pods.  Its ability to destroy marine life and destabilize entire ecosystems of shallower waters is believable and scary.  This sets up the rationale for extreme measures by humans to stop the meg.

Jonas is the expert in the middle of all the action.  At first nobody believes him.  Then they begin to believe him but don’t see the threat as seriously as he takes it.  Will they catch up to his way of thinking in time?

MEG is fast-paced and somewhat short (my copy has large font and generous spacing but still falls under 300 pages).  The action, like the location of the meg swimming across the Pacific, keeps moving so there’s no threat of getting bored.  MEG is also satisfying because bad things happen to characters who are jerks.

The imaginative premise, high-octane plot, and characters you’ll enjoy rooting for or against earn this book five stars.